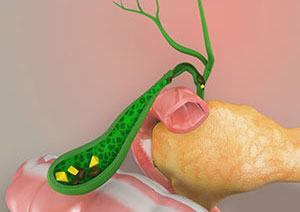 Gallstones are formed inside the gallbladder as a result of precipitation of cholesterol and bile salts within bile. They usually range in size from a grain of sand to 3-4 cms.

Types and causes of gallstones:

Mixed stones are usually yellow-green and account for about 80 percent of gallstones. Scientists believe cholesterol stones form when bile contains too much cholesterol, too much bilirubin, or not enough bile salts, or when the gallbladder does not empty as it should for some other reason.

Pigment stones are small, dark stones made of bilirubin. They tend to develop in people who have cirrhosis, biliary tract infections, and hereditary blood disorders such as sickle cell anaemia, in which too much bilirubin is formed and associated with haemolysis, which is excessive breakdown of red blood cells.

Other causes are related to excess excretion of cholesterol by liver through bile. They include the following:

Many people with gallstones have no symptoms. These patients are said to be asymptomatic, and these stones are called "silent stones”. Gallstone symptoms are similar to those of heart attack, appendicitis, ulcers, irritable bowel syndrome, hiatal hernia, pancreatitis, and hepatitis. So, accurate diagnosis is important.

Symptoms may vary and often follow fatty meals, and they may occur during the night.

Other diagnostic tests may include

Bile-duct blockage and infection caused by stones in the biliary tract can be a life-threatening illness. With prompt diagnosis and treatment, the outcome is usually very good.

The obstruction caused by gallstones may lead to biliary colic, inflammation of gallbladder (Cholecystitis). Other complications may include:

Surgery to remove the gallbladder is the most common way to treat symptomatic gallstones. The most common operation is called laparoscopic cholecystectomy. For this operation, the surgeon makes several small incisions (5-10mm) in the abdomen and inserts surgical instruments and a miniature video camera into the abdomen. The camera sends a magnified image from inside the body to a video monitor, giving the surgeon a close-up view of the organs and tissues. While watching the monitor, the surgeon uses the instruments to carefully separate the gallbladder from the liver, ducts, and other structures.

During the operation the surgeon will commonly perform an intra operative cholangiogram, which is a special Xray to assess for gallstones in the bile duct. This additional procedure does not add any significant risks to the cholecystomy.

If gallstones are in the bile ducts, the surgeon may use endoscopic retrograde cholangiopancreatography (ERCP) to locate and remove them before, or usually after, the gallbladder surgery.